About Panda, Penguin and Small Businesses in Charlotte, NC 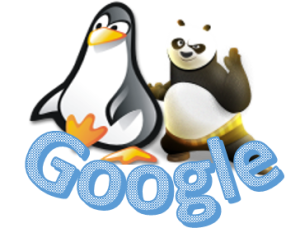 algorithm called Penguin.  The two changes drastically altered the search engine rankings of many businesses here in the Charlotte, NC region.  In this blog article we highlight these changes and what as a small business owner in Charlotte you can do to improve your SEO and search rankings.

They would hire article cheap and inexperience writers, many not fluent in English to write meaningless content for a website, trying to stuff the articles with keywords and back links that may not have had anything to do with the article.  The Internet marketers received exactly what they paid for… hard to read articles with little to no value.

Internet marketers didn’t care, because Google didn’t care.  A few years ago Google just wanted to see words and wanted to be able to identify the keywords that were relevant too your website.  They did not place a heavy emphasis on identifying relevant value or quality in their search engine algorithm.

Google started caring.  People would complain to Google that their sites with original content were being ranked lower than others that were stealing their original content.  That is when Google noticed Google noticed some of its high ranking sites, were to put it frankly, trash.  They knew something had to change.  After all, if they didn’t deliver high quality relevant sites for a user, then customers would quickly migrate to Bing or another search that provided more meaningful search engine results.

Of course there is also an ulterior motive for Google to continue to change its algorithm and its called AdWords.  Every time Google makes a major change to its search engine, not coincidentally, they experience a big bump AdWords revenue.  All those businesses knocked off their top positions, suddenly have to invest in a PPC AdWords campaigns to maintain a presence on the first page.

it is why Google rolled out Panda in February, 2011.  The introduction of Panda was designed to go after low quality thin content sites and increase the value of rich content sites.  As stated by Google:  “This update is designed to reduce the rankings for low quality sites-sites which are low-value add for users, copy content from other websites or sites that are just not very useful.  At the same time, it will provide better rankings for high-quality sites-sites with original content and information such as research, in-depth reports, thoughtful analysis and so on.”

It was followed about a year later with an update referred to as Penguin.  While Panda was aimed at increasing the rankings of high-quality, rich-content sites and punishing low content sites, Penguin took aim at those sites using ‘Black Hat’ SEO strategies such as keyword stuffing and poor quality or irrelevant backlinks.   From Google’s perspective it was an:  “important algorithm change targeted at webspam.  The change will decrease rankings for sites we believe are violating Google’s existing quality guidelines.”

However, Panda and Penguin were different than any other updates Google had ever unveiled before.  In fact, best SEO practices with Panda and Penguin were the exact opposite of what would get sites ranked previously.  Prior to these two updates, SEO strategy would include a heavy emphasis on keywords and link building.

Google gave Internet marketers some warning but with all things Google search engine related, no one can quite predict how the changes made by Google will impact a website’s rankings.  Few believed it would be as dramatic for them as it actually was.  When it was launched, certain Charlotte businesses who had previously been ranking near the top found themselves no where to be found.  This led them to wonder: “Why Penguin and Panda caused my rankings to decrease?”

What Can Be Done

To answer this question, it’s best to understand a little more about Panda and Penguin.  One of Google’s most guarded secrets is their search engine algorithm.  Although, they have admitted publicly that their new algorithm has a built in AI (Artificial Intelligence) to determine what is a high quality site and what isn’t.  In the early days of Panda, Google gave out a convenient 23 bullet point checklist to see if your site was going to be Panda friendly.

Among the things Google disliked were low-quality hard to understand content and “scraping.” Scraping is where articles are taken from all over the web and put into one place.

Having too many of the wrong kind of backlinks was also penalized by Google.  Prior to these updates Google just looked at how many backlinks you had.  Like the articles the system was gamed, where people would go to random blogs, leave a comment and backlink to their site.   Now Google wants to see relevant good quality backlinks.  For example if you’re an ice cream parlor, and you have a backlink from a site that is setup just to be advertiser with tens of thousands of backlinks, Google will ignore that backlink.  On the other hand if you have a presence on Yelp or other backlinks from other food related sites, those backlinks will carry weight.

Keywords are another area in which Penguin and Panda have changed the rules of the game.  It used to be that a heavy emphasis was placed on keywords and they would garb the attention of the search engine.  An ice cream parlor that used the key word 20 times might be given more relevance than another website that used the same words 10 times.  After the update over optimization of the keywords can actually cause you to be penalized by Google.  In their new algorithm it may cause it to be flagged as keyword stuffing.   When looking at your site, you will want to keep the key word density at  no more than 7% and some believe 7% may even be a little too high.

Today Google looks at the influence your business in total has.  It does this by gathering information about your website’s content, new content appearing on your website, keywords, quality backlinks and social media influence and weighing each of these within its algorithm.  They want a well rounded site that offers users engaging content that they share with others (social media influence).  No one thing will help you sky rocket to the top of Google rankings, but rather a well thought out marketing strategy that incorporates, SEO White Hat tactics, social media marketing, video marketing, mobile marketing or other forms of marketing.

If you are a Charlotte, NC business and saw your web site traffic decreased because of the changes to Google’s Algorithm, you can recover.  You are welcome to contact us to assist in seeing how best you can recover your traffic and increase your sales.  We do offer a Free 30 minute marketing consultation.