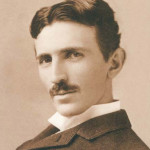 The Greatest US Inventor and Worst Marketer?

The inventor was hunched over his notebook writing furiously.  The light bulb above, emanating a dull yellow flickering light causing eerie shadows to dance across the floors and walls. The inventor’s normally coiffed, jet black hair stood straight on end as if exposed to static electricity.  With his instruments and tools scattered about and the lab bench

crammed with his on-going experiments, an observer would conjure up an image of Dr. Frankenstein’s lab, minus the body parts.

The inventor knew he was on the verge of another major breakthrough and was not concerned with anyone or anything outside his current calculations.  He was aware that most in the media described him in polite terms as being on the fringe, while most disparaged him as nut-case.  He did not care, it was just white noise.  He was consumed with his scientific advances and technological breakthroughs.  He had already been proven right with his battle with Thomas Edison over electricity and the world in time would recognize his superior system of producing AC electricity over Edison’s DC electricity.

His mind, fertile soil for conjuring up one invention after another. He was the first to transmit electricity wirelessly, lighting up over 200 street lamps from 25 miles away. He held the first patent for radio even though initially Marconi was awarded the patent.  Years later, after his death, the Supreme Court ruled in 1943, that this man was in fact the creator of radio.  RC technology used in all toys today and drones can be traced back to this man being the first to invent the technology.  In 1898 during the Electrical Exhibition at Madison Square Garden he remotely controlled a robot-boat.

He drafted an article and received a patent for his idea for a flying machine that could lift off vertically from a standstill, fly forward through the air and land on a dime with no runway.  His concept and idea turned into the helicopter.  When World War I broke out the US government was looking for a method to find and identify German U Boats. The inventor came up with idea of using radio waves.  Unfortunately his nemesis and detractor, Thomas Edison was in charge of the project and dismissed it as ludicrous. It wasn’t until two decades later, Emile Girardeau, developed the system that this inventor had conceived of.  He envisioned that one day people would be able to communicate wirelessly on devices not much bigger than watch.  This year, Samsung has come out with their Samsung gear which is literally the size of a watch.

Most have never heard his name, or if they have they cannot recall a single one of his inventions or any of his technological influences in the world.  We all know Thomas Edison, Alexander Graham Bell, Wright Brothers, Henry Ford, George Washington Carver or Eli Whitney.  Even today, if you Google the greatest inventors, you have to do some digging to find this inventor, Nikola Tesla.

Tesla was a visionary.  While most associate Thomas Edison with inventing electricity it was Tesla that truly had the breakthrough for an efficient delivery system of electricity.  It was Nikola Tesla that electrified the World Fair in Chicago in 1892 and lit up the whole state of New York with his revolutionary breakthrough.

Although celebrated at times during his life, he died penniless and within hours of his death the US government cleaned out his belongings, notebooks and scientific findings and classified them as Top Secret.

Lessons to be Learned from Nikola Tesla

Have the courage of conviction.  Nikola Tesla had the courage to take on the world’s greatest minds and challenge the system and status quo.  He did not care that many thought he was out there and his ideas were way too radical.  His battles with Thomas Edison, both as an employee, competitor and fellow scientist were epic.  How many of us, are willing to challenge our employer, a person of authority, peers or media if we truly believe they are wrong.   History has borne out many of his theories and reaped the rewards of his ideas and convictions.

Be willing to challenge the status quo.  Tesla pushed the boundaries of science.  He challenged the current scientific principles of the day and envisioned technology that was 100 to 150 years ahead of its time.

The late 1800’s and early 1900’s is a fascinating time in US history with the advancement of technology and birth of big capitalist, although in 100 years they will be writing the same thing about the late 1900’s to early 2000’s.